Are you  ready to stand up in front of Annapurna Base Camp within 10 days trek?  If yes, on this post you will learn everything you should know before trekking to ABC(Shor form).

IN Nepal, there are the two most popular base camp hikes. They are: Annapurna Base Camp and Everest Base Camp. In fact, mostly rocky hikers select ABC trek before E

Unlike Everest Base Camp Trek, you can do this trek if you’re a novice trekker. It is the classical treks in the world that offers breathtaking Mountain View, the sight of the typical Nepali village, and allows you to enjoy inside the Annapurna Conservation area.

The Annapurna Base Camp Trek(In short ABC )is one of the most wanted hikes throughout the world. It is an astonishing walk via assorted landscape exploring diverse culture, traditional lifestyle, passing the gleaming mountain vistas and terraced fields. We can find a wide variety of flora and fauna during the hike to ABC.

As the journey leads us to the base of the Annapurna I(the 10th tallest mountain in the world), it is gaining popularity because of the duration and level of difficulty.

On the basis of the difficulty of trekking, ABC is a moderately difficult trek in Annapuran Region.

If you are planning to trek in spring, it provides spectacular views of beautiful flowers including rhododendron, the national flower of our country. Passing via astonishing farmlands, breathtaking landscapes, amazing Gurung and Magar villages, and the forest is a lifetime experience in itself.

How to Go and Away?

Kathmandu is the starting point and Pokhara is the ending point of ABC Hiking. If you want to fly Kathmandu to Pokhara, it takes 25 minutes to reach Pokhara. But, if you don’t want to stay in Pokhara before the ABC trek, We can go directly from Kathmandu to the trekking starting point Nayapul by using Bus or Microbus. Kathmandu to Nayapaul takes about 9-10 hours by driving.

It’s easy to go to the starting point of the ABC trek. If you start your trek from Kathmandu then you need to go directly to Nayapul(Starting Point) of ABC by catching the Bus from New Buspark, Kathmandu.

After returning back from Base camp, you can either take a Bus or Private Car from Ghandruk to Pokhara or Nayapul to Pokhara. You can also come back to Kathmandu directly from Nayapul.

Let’s dive into how to go Abc:

Annapurna Base Camp Short trek implies a short version of the ABC route. Even if you are going to trek the first time in Nepal, you can do ABC short trek in 7 days. In this short version, Ghandruk starts and Ends Point. We will drive up to the Road ending point of Ghandruk at the beginning of the trek. And after back from ABC, we’ll take a vehicle from Kimche- Ghandruk.

7 days Annapurna Base Camp Short Trek is the best alternative for those who want to accomplish the ABC trek in a short period. If you’re an experienced trekker you can do even 5 to 6 days from KTM to Pokhara.

There are plenty of major reasons behind the popularity of the ABC trek. Among them, following the list are highlights. 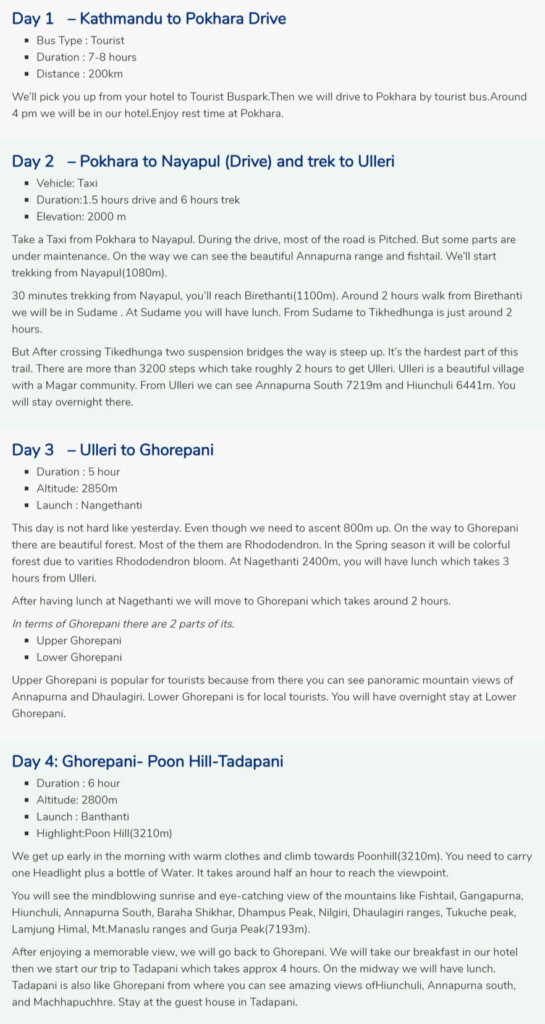 After Tadapani, the trail slides down through the timberland and we can hear flying creatures’ sounds. In the wake of strolling down around 55 minutes, the trail goes extremely steep downhill through the terraced field to Kimrung Khola.

We will cross the suspension bridge and stroll to Gurjung, the trail climbs up after Gurjung around 50 minutes. From there a little bit down and straight to Chhomrong. It takes an approx hour to get to the hotel in Chhomrung. Remain medium-term at Lodge.

The hiking trail descends down 320 meters through thousands of stone staircase crosses up to Chhomrong Khola. Subsequently crosses Chhumrung Khola bridge and climbs up to Sinuwa (2340m).

At Sinuwa, we will have lunch. Afterward, we will stroll through Rhododendron Forest. Trail is more straight but lots of up and down before Bamboo. From Bamboo slide up stroll to Dovan approx 1 hour.

We go through bamboo woods which are soggy and cold at that point climb consistently with a couple of soak segments. It is simply subsequent to achieving the Himalaya Hotel that the woods open up and we are out in the sun again with amazing perspectives on the chilly waterway beneath. After having lunch at Himalaya, we will move to our destination. 1-hour walk from Himalaya you will be in Hinku Cave. From that point, we can see Deurali. From Hinku cavern to Deurali is an additional troublesome part if there is snow.

After Deurali, there is an avalanche place. We can leave this part by following alternative ways. The valleys are wide after Deurali and the way is not ascended like the down of Deurali. Approx 2 hours from Deurali we will be in Machhapuchhre Base Camp(3700m). There are 4 loges in MBC.

After having lunch at MBC we will move to Annapurna Base Camp(4130m). It takes about 2 hours to reach ABC from Machhapuchhre Base Camp. Stay your goal night at ABC with cold temperature. From ABC you will see:

Day: 9 Back to Bamboo

Fill your tummy with a yummy breakfast and relax for a while. Later, check out from the hotel and proceed for your onward journey. In the evening, enjoy a tasty dinner on the Dhow cruise. Later, head back to the hotel for a comfortable overnight stay.

Day: 10 Trekking up to Jhinu

The trekking type of day is some hour up and some hour down. Afterward Bamboo first 30 min up and up to Upper Sinuwa up and down but more flatter.

Upper Sinuwa to Chhorong Khola descends around 1 hour. We will have lunch at Lower Sinuwa. Chhomrong Khola to Chhomrong is steep up around half an hour. It steeps down to Jhinu from Chhomrong.

We will put our bagpack and move down 30 minutes to the river to have a Hot Spring. This is the last of your ABC trek.

Day: 11 Trek to Siwai and Drive to Pokhara

– Trip is Guaranteed to RUN

– Only a few spaces available

We were 2 friends who did the Annapurna Base Camp trek including Ghorepani Poon Hill with guide Ram and porter Dipendra Jan/Feb 2018. It was very comfortable, familiar, and professional with these guys. We had a great tour and a lot of fun. Jayaram responded to all our questions very quickly. Outstanding warm hospitality!

Thank you, Jayaram for this perfect trip.

Frequently Asked Question Regarding the Trek

How do I get from Kathmandu to Annapurna base camp?

There are 2 major options two get a starting point of trekking to ABC. option 1, you can fly Pokhara and drive to Nayapul. Option 2, you can drive to Nayapul directly from Kathmandu or from Pokhara( depends on the places where you want.) By road, you can use private vehicles, or tourist buses, or local buses. From Nayapul, you can reach ABC by walking.

What is the height of Annapurna base camp?

The height of ABC is 13,550′feet/4,100m from the sea level. This is the maximum elevation that you’ll get on this trekking. Upon 1 overnight staying at this level, we’ll go back to Pokhara.

When is the best time to trek Annapurna base camp?

There are 2 main seasons(best time) for trekking in Nepal. The first is in late September to Mid December when the weather is dry, warm, and crystal view. Likewise, the second is March to May(Known as Spring) when it can be wetter than Autumn but flowers are in bloom.

This season is busiest as everyone wants to visit the base camp in the best seasons. However, if you like fewer tourists on trekking, you should visit some weeks later or before the main seasons.

What are the Permits that needed for Annapurna Base Camp?

Likewise, for others trekking in Annapurna Region, in order to trek ABC, TIMS Card and Annapurna Conservation Areas Permits are required. You will get these permits either in Kathmandu or in Pokhara. By obtaining these two permits you can enter Annapurna Trekking.